Crises are heating up around the world, above all internally, yet security policy is almost absent from public debate 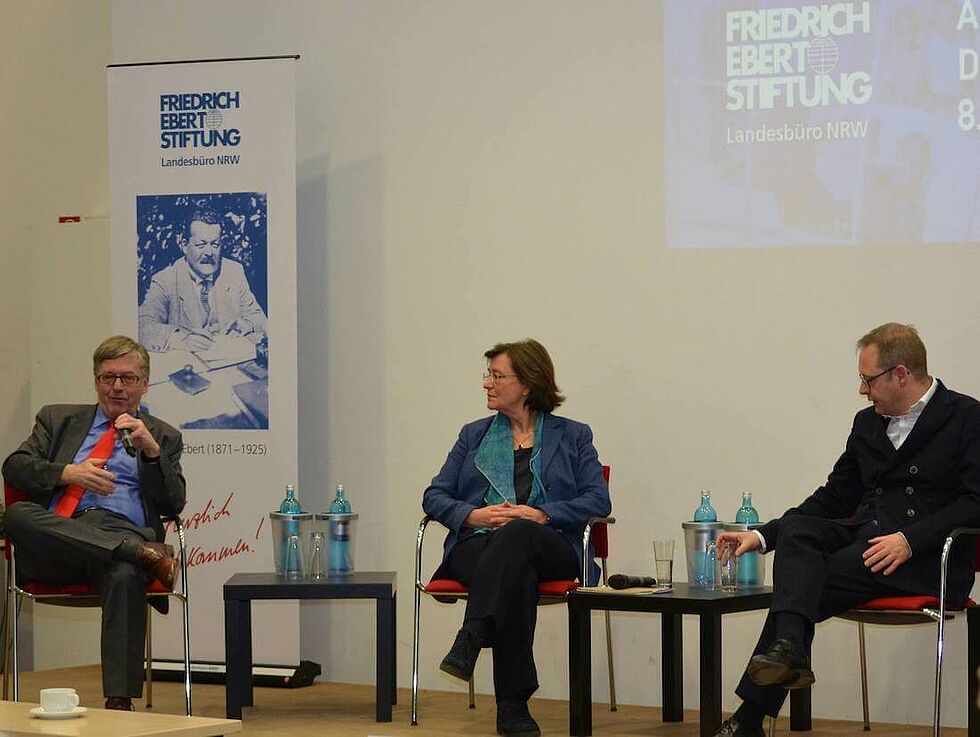 Photo: Among the discussants at the event were Hans-Peter Bartels, Angela Mickley and Karsten Rudolph (from left to right), 13 February 2017, Bochum (Germany) by FES / Artur Sotula

It’s a world of far-reaching transformations, armed conflicts and mass flows of refugees.

“Germany is a major player in global security policy, and as such seriously involved in world events,” says Christian Klatt of the Friedrich-Ebert-Stiftung’s section in the federal state of North Rhine-Westphalia in Germany. The regional office where he works invited experts from the armed forces, civil society and the media to examine what is going on alongside the diplomatic stage at the event “Under scrutiny: Germany’s role in the world” held in Bochum this month.

In the last few years, the framework for security policy has seriously deteriorated in Europe and along its borders. Wars and crises have blown up in regions once considered to be developing peacefully. Global terrorism is more active than ever.

“This situation raises questions and is causing concern among our citizens,” declared Professor Karsten Rudolph from the Ruhr University in Bochum, moderator at the event. And yet security policy rarely features in public debate.

“The German armed forces are not front page material,” commented the Düsseldorf-based journalist Paul Elmar Jöris, who reports for the German broadcaster WDR on political developments in North Rhine-Westphalia. “It only crops up in the media when in case of yet another scandal about army equipment or fatalities during operations.” Jöris firmly believes that the German armed forces are partly themselves to blame:

“[Their] press relations are reactive, and before they answer any questions they weigh up: Will this help my minister?” When universal conscription was abolished in 2011, the Bundeswehr lost visibility. “The armed forces have long since lost the relevance they once had for every young man. The uniform is rarely seen in everyday life. In the days of military service, every conscript was a local expert – in the family or among friends – on security policy issues,” Jöris argued.

But ten million Germans have experienced military service, countered Dr Hans-Peter Bartels, the Parliamentary Commissioner for the Armed Forces of the German Bundestag. “The media often get hung up on very superficial things,” he lamented, quoting the views of historian Heinrich August Winkler: “In 2014, with the occupation of the Crimea and the growing strength of the terrorist militia IS, the post-Cold War period came to an end. That was compounded in 2016 by Brexit and Donald Trump’s election as President of the United States.”

Lieutenant-Colonel André Wüstner, federal chair of the German Armed Forces Association (DBwV), felt there had been a growth of interest in security policy since the publication of a White Paper defining guidelines for security policy decisions, which sets out a security policy framework for Germany and its allies in the coming years from the perspective of the federal government.

“Since it was presented by the minister of defence, we have conducted more than a hundred events with very different stakeholders and they have been well attended,” said Wüstner, adding with regret that the number of specialized journalists continues to decline “By cutting back on staff, editorial desks are losing expertise. Besides, the media rely increasingly on tabloid methods.” Glitches with the military transporter A400M, obliging defence minister Ursula von der Leyen to switch planes during her trip to Lithuania, were – he remarked – suddenly more significant to the media than her actual visit to the Germany-led NATO battalion.

Professor Angela Mickley from the platform Civil Conflict Management, who also teaches at the Officers’ Academy of the German armed forces, raised attention to what she believed was a false impression in the light of the current global crises. “Altogether there are now fewer wars and conflicts between individual states, but conflicts – including wars – within states are on the increase [and] that is a dramatic development,” she said pointing this as an explanation why soldiers have been taking a very close look at the reasoning by the German parliament in its mandates to the federal armed forces. “It is of fundamental importance to us to know why we are going to kill or be killed,” commented Wüstner.

Members of the armed forces have been discussing parliamentary decisions affecting them in great depth and through a very critical lens. “We are not just the first to hit, but naturally also the first to be hit,” mused Wüstner, endorsing Mickley’s tenet that conflicts should not be managed by military means alone. “Security must always be restored. That is beyond dispute. But when actors of civil society are able to impart appropriate skills, parties to the conflict can be helped to survive the confrontation,” she urged. By building conflict resolution skills, many different tools can be mobilized to reach consensus peacefully.

The function of the Parliamentary Commissioner for the Armed Forces was created in the wake of debate about rearming Germany after the Second World War. “Today we have the smallest Bundeswehr in our history,” Bartels declared. “And the German armed forces are able to do a good job with the means and materials currently at their disposal,” claimed the Commissioner. But if the German parliament were to allocate more tasks to its armed forces, it would also have to provide a bigger budget. Outlining one of his own objectives, he continued: “While the former federal defence ministers Karl-Theodor zu Guttenberg and Thomas de Maizière were in office, the Bundeswehr’s large-scale hardware was pruned back to 70 per cent. I want the Bundeswehr to be fully equipped again.”

Jöris compared the specific dangers facing Germany and Europe with circumstances after the end of the Second World War: “There is an insecurity to our east, and in addition to that the situation to the south is extremely unstable.” It was fully clear to him that the troops could reckon with further operations. “When we reach that point, security policy will be more visible as a theme. Not least because the German armed forces will have to recruit massively. Current personnel will not be adequate to deal with new tasks,” observed WDR’s security policy expert. In his view, it is more difficult nowadays to recognize when a war commences. “Written declarations of war are no longer handed out. There is a big risk of sliding into a war nobody wants,” said the journalist.

For Mickley, security hotspots are coming closer and closer to Germany and the European Union. “And in this situation, we belong to an alliance with NATO where members speak with different tongues,” she commented. "Russia is a long way from the United States" , said Mickley, “but not from us.” Wüstner also referred to current tensions: “In the Baltic region you meet people who are actually scared. They want troops to be stationed there.”

Increasingly, Germany is called upon to assume responsibility because of its location at the heart of Europe. “Politicians have become very quick about taking that on,” insisted Lieutenant-Colonel Wüstner. Given that members of the navy, for example, spend up to 280 days at sea, which is hardly family-friendly in the long run, a conversation is urgently needed about the security architecture in Germany. In this context, Bartels wanted Europe to be granted a greater capacity to act and hence more autonomy. “it’s not enough to be a small fry in security policy. We need to be in a position to cooperate with other countries in a way that will give our army far more weight,” said the Commissioner. Piecing armed forces and capabilities together like a jigsaw puzzle is a thing of the past. “We are used to cooperation in all our operations,” said Wüstner. The same applies to training: “We are incredibly good at it. There are so many regions in the world where we can provide training as a huge preventive contribution to improving the security situation,” added Mickley.

The audience discussion that followed above all addressed the question of reintroducing universal conscription. But according to Bartels there was currently no reason to do this: “We no longer have the infrastructure for hundreds of thousands of boys – and I assume that girls would be conscripted nowadays too.” The voluntary approach to military service is sufficient at present. Responding to the feeling of one visitor that the youth advising officers in the German armed forces are currently encountering more frequent hostility, the Parliamentary Commissioner said: “Society gave itself the armed forces when it adopted the Constitution. There is no doubt in my mind that the armed forces should be going into places like schools and career fairs to provide information and advertise themselves.”

By the end of the evening it was clear that the demands made of Germany’s role in the world are changing. Partners in the alliance are calling on the Federal Republic to exercise greater leadership – and that includes military matters. But before the federal army can take on new or additional tasks, it needs better financial, material and human resources. That requires a public debate about security policy to lay bare all arguments. It was evident that expectations of the Bundeswehr’s ability to resolve crises should not become excessive: “Ultimately the armed forces can only gain time. They can create an environment where the agents of civil society can step in. But solutions can only ever come through diplomacy,” concluded Paul Elmar Jöris as he wrapped up the event.

Translated from the German and adapted for an international audience.