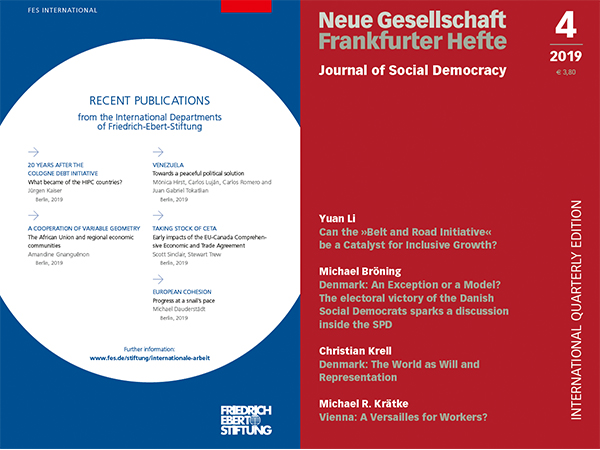 The debate about the relationship between capitalism and democracy is age-old. While liberals present capitalism or at any rate ‘free’ markets as a precondition of democracy, Marxists see in the democratic state nothing but a cleverly disguised tool of dictatorship to be wielded the capitalist class. Social democrats occupied the middle ground between the two antagonists, regarding the democratic state as an instrument for taming capitalism. That view seemed to be confirmed by the trentes glorieuses, the three decades after 1945. During those years ‘embedded liberalism’ (John Ruggie) with a Keynesian flavor stimulated a rapid increase in the prosperity of advanced Western economies while still distributing the wealth fairly equitably.

But at least since the crisis in financial markets and the ‘great recession’ of 2008–2009, skepticism has been spreading. The deregulation of capitalism, spearheaded in the 1980s by Reagan and Thatcher, has caused a shift in the power relations between capital and labor as well as between markets and the state (in favour of the former) while at the same time drastically increasing inequality. Thomas Piketty and Wolfgang Streeck are both prominent representatives of this sort of skepticism. Piketty has documented the inexorable rise of capital and, in response, has proposed a global tax on wealth that is unlikely to be implemented. Streeck thinks that democracy has already been emasculated by sovereign debt and capital markets.

Now the eminent political scientists Torben Iversen and David Soskice have enriched the debate – or rather tossed a wrench into it. Both scholars are well known for their work in the field of international political economy. Soskice, along with Peter Hall, is one of the founders of the important ‘Varieties of Capitalism School’. Expressed in a highly simplified form, their argument is that capitalism and democracy have a resilient and dynamic symbiotic relationship. Current developments (globalization, digitalization, inequality, etc.) do not jeopardize either one of them. In particular, the nation-state as the space for their symbiosis is stable and does not need to be rescued from the forces of global capitalism. It is precisely for this reason that their contribution to the debate is of special importance to social democracy’s search for orientation, in policy and programs.

The analysis offered by Soskice and Svenson holds that the nation-state is not in danger, since the competitiveness of the more advanced sectors of the economy depends on spatially circumscribed factors: the demand for a highly skilled workforce, regional clusters of complementary private and public suppliers, service-providers, research and training institutions, competitive product markets regulated by the state (via competition policy and market planning), pro-modernization industrial relations; and the capacity to respond to external shocks by adopting a forward-looking strategy that takes into account the entire economy. Those conditions tie the economy to a specific location and compel it to accept a certain degree of control that encourages and finances social stability and an appropriate supply of public goods. Iversen and Soskice also use statistics to prove that the tax burden on capital has hardly fallen since 1995.

It is argued that inequality does not assume forms that evoke massive social pressure in favor of redistribution and higher taxes on the rich. Here, the focus is less on the poor than on the middle classes who, as voters, have the most influence. As long as they can see prospects for affluence and upward mobility for themselves and their children, mainly thanks to the good educational and employment opportunities they have enjoyed, their interest in redistribution will remain limited. Moreover, the authors also show that the growth of inequality has been less dramatic than Piketty makes it appear. Thus, since 1985 the ratio between mean and average disposable income and the Gini coefficient of disposable income have grown only slightly worse. To clarify: disposable income refers to income after taxes plus social transfers, while the Gini coefficient is the standard indicator of inequality.

Furthermore, the decline of Fordism, the political economy of which laid the foundation for the trente glorieuses, also changes the ways in which societal interests are perceived and defended. While the interests of highly skilled and less skilled employees were still similar and closely aligned in the era of Fordist mass production, in the new knowledge-based (digital) economy they drift further and further apart. The new middle classes affiliated with digital capitalism supports these transformations, whereas more traditional classes see themselves as the losers. In addition, regional disparities between advanced urban centers and potentially neglected rural areas emerge ever more starkly.

Core voters support parties that manage the transition in politically successful ways. That is the case because the transformation is politically constructed and not the blind outcome of global market forces or technical potentials. State-supported research, education, and industrial policy are supported and demanded by the new middle class. By contrast, the old middle class, threatened by downward mobility, feels drawn to populism. Whether populism expands or not, and whether or how it can be controlled, are questions that depend on the educational system. An open educational system that affords the offspring of the old middle class the chance to move up into the new one is the best antidote to this reactionary threat.

Finally, as these authors assess matters, the advanced capitalist democracies are resilient in the face of secular changes since they generate an electorate of skilled workers who have a powerful interest in the expansion of modern sectors of the economy. As long as the nation-state relies on education and other policies to guarantee prosperity and use social-welfare policies to distribute it, its survival is not in jeopardy.

Iversen and Soskice lean toward an optimistic view of capitalist development, which would rule out radical moves of the kind deemed necessary by many people on both the left and the right. Only the future will reveal whether the authors have been too optimistic. Increasing inequality does jeopardize democracy, both through the power of the super-rich to influence the political process in a digitalized public sphere and through the threat to outsourced jobs. Furthermore, a growing class of senior citizens might have less interest in future-oriented policies than the authors expect. As far as the debate within social democracy is concerned, it would be beneficial to incorporate an analysis with the theoretical depth and empirical grounding provided by the authors into our understanding of these issues.

Michael Dauderstädt is an independent consultant and publicist. Until 2013 he headed the Department of Economic and Social Policy in the Friedrich-Ebert-Stiftung. Adapted for style, the text was first published by Neue Gesellschaft / Frankfuerter Hefte, Journal of Social Democracy.