New York City (USA) - FES joined this year’s session of the United Nations Commission on the Status of Women (UNCSW) with a delegation of eight feminists from eight countries. 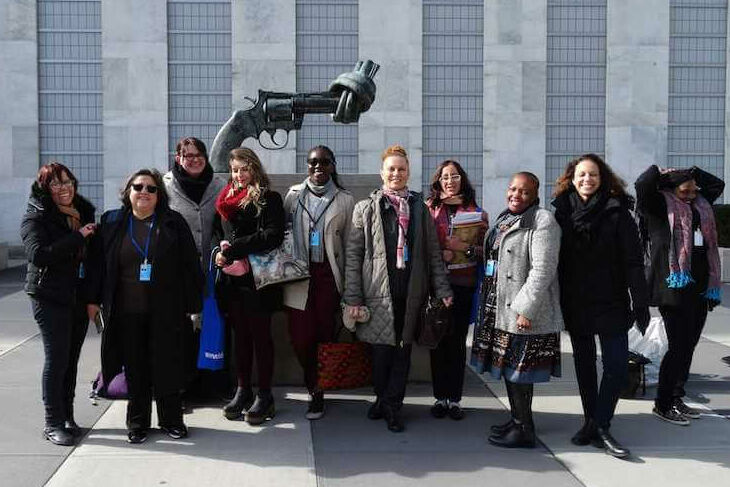 At a time of right-wing populists that are gaining strength worldwide, rising inequality and neoliberalism that is structuring both the economy and our social and cultural realities, the left must reshape its vision and responses. Social justice cannot be achieved without gender justice.

Feminism has much to offer to a progressive social democratic movement. Friedrich-Ebert-Stiftung throughout its work on gender equality has been highlighting this position, together with the potential that feminists hold to transform our societies and make social justice a reality.

In this spirit, Friedrich-Ebert-Stiftung joined this year’s March debates at the United Nations Commission on the Status of Women (UNCSW) with a delegation of eight feminists from Bolivia, Botswana, Chile, India, Israel, Jordan, Philippines and Uganda.

Each year, at the UNCSW sessions governments negotiate "agreed conclusions" on a set topic of concerns to the status of women globally. Once approved by all UN member states, the conclusions outline a global framework for response by the global community to the topic of concern.

Women’s Economic Empowerment in the Changing World of Work, this year’s topic at the UNCSW session, focused on issues faced by women as workers. The perspective of women as workers differs from the otherwise often portrayed images of women as victims of violence, poverty and conflict.

It comes to no surprise that the issue of unpaid care work constituted an important aspect during the official negotiations between governments as well as those among civil society representatives. Furthermore, decent work, the ratification and implementation of all conventions and instruments of the International Labour Organisation and the gender pay gap featured prominently in all discussions.

Disappointingly, the negotiations were characterised by the struggle to defend the status quo against conservative forces. There was little determination to further move the boundaries towards achieving a truly just and equal society.

"The principal challenge of gender inequality has not been addressed," says Raquel Romero of the Colectivo Cabildeo in Bolivia and member of the FES delegation. "It is necessary to analyse the causes of the problem – the real problem is patriarchy and it has to be dismantled!"

Francisca Valenzuela from the Observatory Against Street Harassment in Chile (link in Spanish) suggested that we need a feminist economy, focusing efforts on "creating a new system rather than finding remedies for the problems that we are creating with the current system."

For Yael Hasson from Adva Center in Israel the economic system must enable able to allow for both women and men to be providers and care takers on equal terms: "Their [men and women’s] different positions in society have to be taken into account from an intersectional perspective. Unpaid care work needs to be recognised as the contribution to the economy that it constitutes."

Members of the FES delegation agreed that if the multilateral processes are not delivering, women need to take charge to actively shape and change the world of work. Discussions with like-minded representatives of trade unions and civil society organisations during the five-day program showed that there are many points of common interest worth pursuing together.

"I realised how I can use the outcomes of UN processes and hold my government accountable together with other actors from civil society that pursue the same goals as I do," says Patricia Twasiima from Chapter 4 in Uganda.

FES will continue to offer a platform for such debates and to assist in building stronger ties between progressive political parties, trade unions and social movements on the one hand and feminists on the other hand.

Editor's note: An earlier version of the article, because of an editing error, misidentified the number of countries represented in the delegation - instead of seven it is feminists from eight countries.