China's Belt and Road Initiative (BRI) is stretching out to affect regions not geographically linked to the actual project. 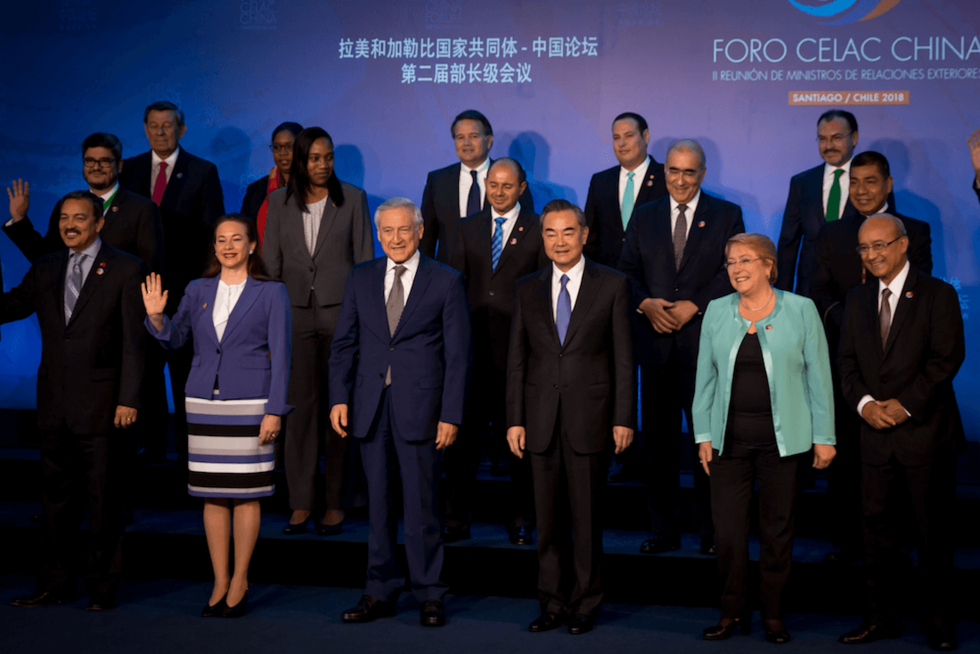 Photo: Forum of China and the Community of Latin American and Caribbean States (CELAC) in Santiago de Chile in January. Image by Cancillería del Ecuador via flickr (CC BY-SA 2.0)

Although on the other side of the globe, Latin America is coming under the purview of Beijing's Belt and Road Initiative, as China is promising infrastructure development to guarantee access to raw materials and agricultural products

China's Belt and Road Initiative (BRI) is stretching out to affect regions not geographically linked to the actual project. In January 2018, President Xi Jinping called on Latin American countries to join Beijing and contribute to the initiative.

Earlier that month, Foreign Minister Wang Yi attended the second Ministerial Meeting of the Forum of China and the Community of Latin American and Caribbean States. As part of the meeting, a special declaration on the BRI was adopted. According to Wang, the cooperation aims at the development of logistic, electricity and information pathways.

"It marks the beginning of a new era," Xi Jinping declared in his address to the Forum.

So far Latin America hasn’t been formally included in the BRI. Hence there are no commitments yet to any investments through the Silk Road Fund. Panama has been the only Latin American country to sign one of the more than seventy effective Belt and Road Cooperation Agreements. However, China’s interest in drawing Latin America closer via the BRI is becoming apparent. The future cooperation between China and Latin America as sketched out by Wang in Santiago resembles the five BRI links: policy cooperation, infrastructure development, investment and trade facilitation, financial integration and cultural and social exchange. At its heart lies a major passage across the Pacific Ocean.

For some time now, the Latin Americans have been convinced that the future lies in the Pacific Region, both economically and geo-strategically.

This inclusion of Latin America into the initiative ties up with the existing relations between the region and China. Among the Latin American Presidents, Xi’s call is falling on fertile ground. Through the BRI, Latin America would get closer connected to the Asia-Pacific Region. For some time now, the Latin Americans have been convinced that the future lies in the Pacific Region, both economically and geo-strategically. The left has almost euphorically welcomed what it saw as a power shift taking place over the last decade. It was regarded as a chance to establish a counter-balance to the detested United States. But also, conservative and liberal forces like the Argentinian, Brazilian or Mexican governments set great store by good relationships with the Asia-Pacific Region and particularly with China. Although ideologically closer to their ancient allies in Northern America and Europe and therefore also seeking admission to their clubs such as the Organisation for Economic Co-operation and Development, they do not want relations with China to suffer from it. And more important still, for right-wing forces within Latin America, foreign policy is first of all economic foreign policy. Whatever is favourable to the trade balance must be supported and promoted.

China's role is being judged more and more ambivalently though, even in Latin America; it contributes to the fixation of Latin America’s role as a supplier of primary goods and to the prevention of the region’s industrialization.

Beijing's advances are all the more welcome in the light of the increasing disinterest and sometimes arrogance towards Latin American countries from the US White House. Over the recent years China has been continuously expanding its presence in Latin America. However, Beijing has repeatedly emphasized that it is not staging a geopolitical competition with the United States.

China's role is being judged more and more ambivalently though, even in Latin America. The almost exclusively economic stance China has taken in the past has come under criticism. The People’s Republic buys raw materials and agricultural products and in return sells low-price industrial goods. That way it contributes to the fixation of Latin America’s role as a supplier of primary goods and to the prevention of the region’s industrialization. Additionally, social and ecological conflicts are being fostered. The offer to make Latin America a part of the BRI follows this pattern since the development of transport routes and the connection of land and sea lies at the centre of the initiative. The focus is on bi-oceanic railway connections and tunnels.

Through the Chinese infrastructure projects in Latin America there is a call to closely examine where the labour force will come from, will labour rights and environmental protection be guaranteed, will administration and control of the completed projects be handed over to the local governments.

Particularly the reduction of transport costs between Brazil and China is at stake, for instance by making Peruvian harbours easily accessible by land. This would aim to guarantee China’s access to the region’s raw materials. Over the years the number of agreements on cross-country and cross-border transport routes has been growing. So far, these have not resulted in many developments on the ground.

Should Beijing effectively realise Latin America’s integration into the BRI it would be only a matter of time for this to change. Environmentalist organizations are already sounding the alarm since a route through the Amazon region would favour slash-and-burn and deforestation. What is more, there needs to be a call to closely examine the Chinese infrastructure projects in Latin America about issues on where the labour force will come from, will labour rights and environmental protection be guaranteed, will administration and control of the completed projects be handed over to the local governments, etc.?

The Latin Americans are hoping for financial aids towards the development of their deficient infrastructures and are relying on impulses for economic development through investments. They trust in China to continue diversifying its business relations with Latin America. In addition to the purchase of raw materials and agricultural products Chinese companies are investing more and more in branches like the automotive industry, e-commerce and technology. The Chinese have already founded more than 2,000 enterprises in Latin America. In these areas too, BRI could be reinforcing current trends. The planned transpacific fibre optic internet cable from China to Chile may serve as an example.

Passivity, will render it difficult for the region to establish its own interests and make use of the initiative to its own advantage

It is apparent, though, that the Latin American governments are entirely leaving the field to Beijing. They do not formulate ideas or requests of their own. In addition to that, there are no substantial regional agreements on relations with China. Each government negotiates with Beijing for itself. Public debates on BRI are very limited, too. There has been insufficient reporting on the declared integration of Latin America into the initiative. Geo-strategic considerations are not under discussion at all. This passivity, however, will render it difficult for the region to establish its own interests and make use of the initiative to its own advantage. ###

Claudia Detsch is the director of Nueva Sociedad.