Ulaanbaatar (Mongolia) – City planner Sumkhuu Yadam on urban planning as a political activity in the Mongolian context, and the rights of the growing city population 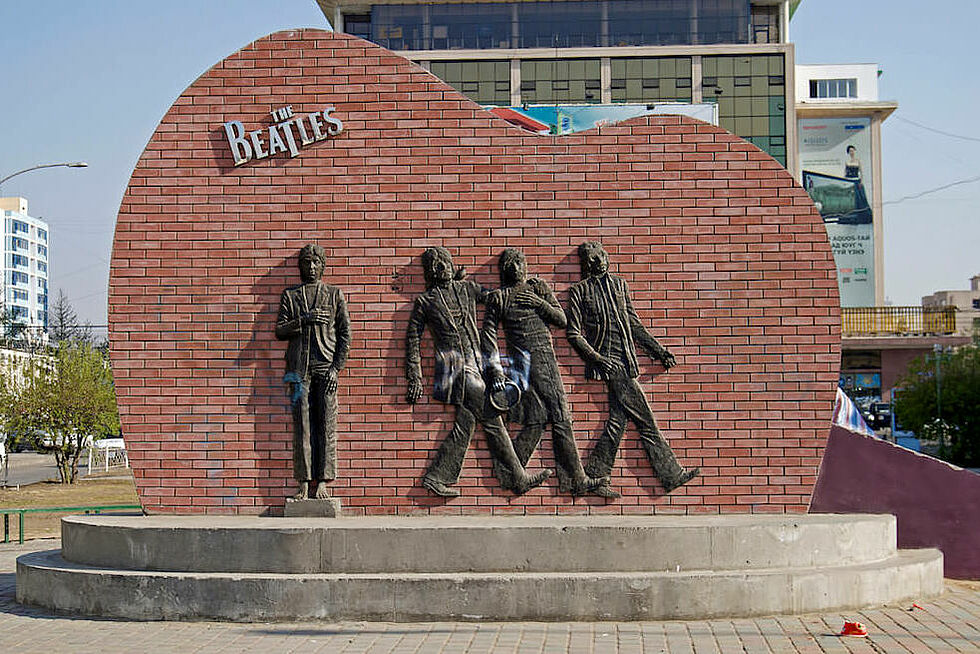 One of only seven Beatles memorials around the world, the future of this landmark on Tserendorj street is at risk at being bulldozed as part of a redevelopment project in Ulaanbaatar. The relief commemorates the transition to democracy of Mongolia, and the redevelopment plan to build commercial properties in the area has sparked protests by urban dwellers. Photo by Dave Gray Licence 2.0 CC

The Mongolian capital presents a very specific set of challenges to urban planners, with its ballooning population, minimal infrastructure and harsh climate. The country’s nomadic culture is apparent in the 60 per cent of the city that live in tent, or ger, districts on the outside of the city, often unconnected to any utilities.

At a conference on rising cities hosted by Friedrich-Ebert-Stiftung and partners in Ulaanbaatar in July, we put some questions to city planner Sumkuu Yadam about planning as a political activity in the Mongolian context, and the human rights of the growing urban population.

What are the most pressing planning problems in Ulaanbaatar?

Sumkhuu Yadam: Ulaanbaatar’s population of 1.3 million may not seem that much in a global context, but it accounts for 43 per cent of the national population. It is more than just the national capital, it is also a primate city, i.e. one that is at least twice as large as the next-biggest city in the country. This makes it a focus for the whole country’s economy, politics, education, society and health care, exacerbating the pressures on its infrastructure.

Many of the recent migrants to the city brought their ger, or nomadic tents, and settled in them on the outskirts. These districts do not show the poverty characteristics of slum dwellers or urban poor, but they do often lack formal infrastructure

Despite its relatively small size, Ulaanbaatar has more than its fair share of the typical problems associated with rapid urbanization. These include lack of infrastructure, limited public transport, overwhelming traffic, and poor urban services.

A unique feature of Ulaanbaatar is its large ger districts. Many of the recent migrants to the city brought their ger, or nomadic tents, and settled in them on the outskirts. These districts currently account for around 60 per cent of the population. They do not show the poverty characteristics of slum dwellers or urban poor, but they do often lack formal infrastructure. These segments of the population are significant contributors to urban issues such as air pollution, notably through their use of coal and wood for heating and cooking.

Across the city as a whole, only around half of the residents have access to permanent water supply, sewage system and central heating.

In December 2016, Ulaanbaatar hit local record air pollution levels. The World Health Organization has reported that some types of pollution were recorded at levels 80 times higher than the peak exposure levels and five times worse than Beijing at the same time.

How has the country’s history affected urban planning in Ulaanbaatar?

YS: In general, urban planning is a highly politicized activity. Ulaanbaatar is no exception, and politicians have often used the urban agenda to make campaign promises. One of the first major impacts was the 2002 law allocating land ownership to Mongolian citizens. In effect, the programme actually encouraged informal settlements, because only those who at the time lived in apartments got their ownership rights affirmed. Those who were living in yurts were left nothing.

Currently many urban redevelopment projects are delayed as the developers have found themselves unable to meet the rocketing asking prices for land. This was the case especially after the municipal elections in 2008, where the successful candidate encouraged the land owners to hold onto their land and wait for the value to increase.

How have urban practices shaped the city?

YS: There historically has been little centralized urban planning in Ulaanbaatar. The signs of unplanned development are to be seen all over the city, in the narrow, crowded pavements, the dilapidated buildings, and unmaintained green spaces.

Limited public transport and dangerous conditions for pedestrians or cyclists leave 95 percent of daily passengers opting for private cars and just 5 per cent for public transport for work and school commutes.

There is an urgent need of the legal framework reform as the urban planning and land-related legislation that is in place is widely violated. This is in part due to a lack of clarity and guidance, and the impractical nature of some of the provisions. For example, it is mandatory that any development project safeguards at least 30 per cent of its surface area for greenery, regardless of the type or location of the project, a provision we rarely see achieved.

Regarding the air pollution, the government has attempted a few actions to reduce it. Once such action is the "Clean Air Project" supported by the World Bank and Asia Development Bank. With over millions of US dollars spent, the project has so far functioned as a stove-replacement programme, swapping coal -based stoves for more energy efficient heaters, an action that has achieved little to introduce effective change. Contrary to the reporting by government agencies about reduced levels of air pollution, the number of cases testifying to health conditions caused by air pollution such as asthma, chronic bronchitis, and minor respiratory irritations, continue to increase.

YS: Urban planning is in the early stages in Ulaanbaatar, as mentioned above. This has left a gap in the provision of services to residents, and there is an urgent need for an integrated approach and comprehensive planning. Children are suffering from many new illnesses due to the air pollution, and the hospitals are overcrowded and concentrated in one part of the city. People spend hours in traffic to cover the short distances to work or school. Many parents drive their children to school out of safety concerns.

To tackle air pollution, last year the government halved electricity prices in certain areas to encourage residents to switch to electric heating and burn less coal. However, the programme had limited success. Many ger residents are effectively economic migrants who seldom have the means to afford the cost of electricity that comes along with electric heaters. Furthermore, many areas in the ger districts are not connected to the grid at all.

Participatory planning means not just informing; it is about listening the voice of voiceless. Last year, perhaps for the first time, people protested against the government’s inaction in the face of air pollution.

Redevelopment of the ger districts is widely considered the best way to tackle air pollution. Housing projects were boosted by government subsidies between 2012-2016. The plan was to support both supply, by subsidizing builders, as well as demand by offering low interest housing loan. The construction companies undertook to cap house prices in return for the support they received. However, the price cap was far beyond the financial reach of most ger residents. Despite the cap, house prices continued to soar, even if there are still 20,000 apartments that haven’t been sold, only in this year. The unsold apartments are also larger in size and simply not affordable for those living in ger districts.

YS: There is not an easy fix and for sure it is a complex issue. Long- and short-term actions with comprehensive planning should be implemented. Having said that, planning related documents and guidance must be transparent and easy to read. The current Master Plan for the city, which is available online, is sometimes unreadable even for experts. Statutory planning, specifically plans and guidance that show what people can or cannot build on their land, are so far not available.

Most people have insufficient knowledge about urban planning. Hence, it is also important to raise awareness about urban issues and encourage more citizenship initiatives. Participatory planning means not just informing; it is about listening the voice of voiceless. Last year, perhaps for the first time, people protested against the government’s inaction in the face of air pollution.

More recently, people were angry against a planned development along the Tserendorj street, one of the city’s few internationally known public spaces, which houses the Beatles’ statue. The protesters were not, in fact, only against the development per se, but rather they were angry because they were seeking clarification and fair development. It is overall a good sign that more people know their rights to the city, are eager to be part of the negotiations and participate in planning. ###

For more information on the work by FES in Mongolia on the topic of rising cities contact the resident representative based in Ulaanbaatar, Niels Hegewisch at info(at)fesmongol.net.